Fresh, shell-on, headless shrimp is the main product that we carry and we have over 40 years experience in handling it!

ALL OF OUR SHRIMP ARE DOMESTIC WILD-CAUGHT (NOT FARMED RAISED)!

Usually our trucks will have 3 or 4 different sizes available and you can buy any amount you want. Flavorful and firm, Gulf shrimp can be fried, stuffed, baked, boiled with spices, stir-fried or grilled.

Generally you should use bigger sizes for frying or grilling, and smaller sizes for boiling or stir-frying. Roughly speaking, two pounds of raw headless, unpeeled shrimp, properly cooked, will yield one pound of cooked, peeled and deveined shrimp. Shrimp cooks in just 2-3 minutes at a rapid boil. When the meat turns opaque, it's done. Remember not to overcook the shrimp... it will toughen the meat. See the instructions below on cooking and freezing.

Shrimp is the most popular and valuable seafood in the United States. This is not surprising because shrimp have a distinctive flavor, and the pink-white cooked meat is tender, delicate and delicious.

There are three main commercial species of shrimp in the Gulf of Mexico and South Atlantic waters, categorized their colors with slight variations in taste according to the species. "Green" shrimp is a term used to describe raw shrimp of any species, in the shell. Regardless of the color of the green shrimp, when cooked the shells of all species will turn red, the meat will become white with reddish tinges, and the flavor and nutritional values will be the same. Shrimp are an excellent source of high-quality protein and are low in fat.

WE SELL BOTH WHITE AND BROWN SHRIMP DEPENDING ON THE SEASON 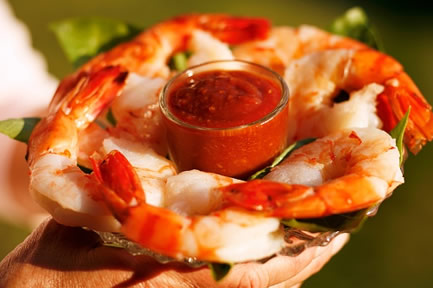 White shrimp (Penaeus setiferus) are concentrated south of the Carolinas; however, the bulk of the harvest comes from the Gulf of Mexico. Whites, the standard against which other shrimp species "domestic and imported" are often measured, are sweet and firm and account for around 35% of the domestic catch. White shrimp grow to 8 inches.

Brown shrimp (Penaeus aztecus) are concentrated off the Texas-Louisiana coast and are mostly caught in the summer months. Browns tend to be firmer than whites which makes them good for battering, and have a stronger, slightly iodine flavor. They typically account for around 55% of the domestic catch. Males reach 7 inches, while females grow to 9 inches. Shrimp are decapod crustaceans characterized by five pairs of legs, often with small pincers on the end. The first three pairs are used for walking. They have large, well-developed eyes, large swimmerets, and long antennae. Most shrimp spawn offshore in deep water from early spring through early fall. Young shrimp are carried by currents into coastal estuaries to mature. Shrimp are harvested with trawls which are cone-shaped nets towed along the bottom in waters near shore. Turtle excluder devices (TEDS) and by-catch reduction devices (BRDS) are used, as required by law, to minimize the capture of non-target marine turtles and fish.

The food editor at Coastal Living demonstrates how easy it is to work with fresh unpeeled shrimp.

To boil shrimp, bring salted water to a rolling boil (spices such as "crab boil" are optional). Add shrimp with shell on. Boil 2-4 minutes, depending on size. Remove from water and run under cold water. Chill or serve hot, with cocktail sauce.

To fry shrimp
To fry shrimp, peel shrimp and devein, if needed. Fry battered shrimp in oil at 350°F until golden brown. Stir-fry unbattered shrimp in butter or oil until pink, usually 3-4 minutes.
To grill shrimp
To grill shrimp, peel shrimp and devein, if needed. Either marinate shrimp for a few hours, for example, in Italian dressing, or brush with butter and garlic. Cook on grill until pink on both sides. They cook very fast so keep an eye on them. Time depends on how hot the coals are.
To devein or not to devein?
Whether or not to devein shrimp is a matter of personal preference. In general, small and medium shrimp do not need deveining except for cosmetic purposes. However, the vein of larger shrimp should generally be removed.
To shell fresh shrimp
To shell fresh shrimp, beginning at the legs, peel the shell up toward the top of the shrimp; repeat on the other side until the shell slips off. If desired, gently pull on the tail portion of the shell and remove it.
To devein shelled shrimp
To devein shelled shrimp, peel shell, use a small sharp knife to make a shallow slit along its back from the head end to the tail. Rinse under cold running water to remove the vein, using the tip of a knife, if necessary.
To butterfly shelled shrimp
To butterfly shelled shrimp, split the back of the shrimp with a small sharp knife without separating it into two halves. Press the shrimp down flat like a butterfly.
To store fresh shrimp
To store fresh shrimp, put shrimp in the coldest part of the refrigerator at 32-38°F in a covered container wrapped in ice. Replace ice as it melts and drain off the water. For maximum quality, cook fresh shrimp within one to two days of purchase. If planned use is more than two days following purchase, freshness is better maintained if shrimp are frozen the day of purchase. Cooked shrimp may be stored in the refrigerator for two to three days. Freeze or refrigerate leftovers promptly.
To freeze fresh shrimp
To freeze fresh shrimp, freeze shrimp raw, with shell on, and completely submerged in water! This prevents freezer burn and drying out, and retains flavor and texture. Use heavy-duty freezer bags or Tupperware or any container that will hold water without puncturing. Freeze in amounts that you plan to use for each meal. Raw headless shrimp in the shell maintain quality during freezing longer than frozen, cooked shrimp and are best if frozen at the peak of freshness. Frozen raw shrimp maintains quality for approximately 6-7 months though it can be kept longer, whereas home frozen cooked shrimp begin to lose quality after approximately one month.
Nutrition facts